My husband and I opened our home for 8 years to pregnant teens. Of all the girls who came through our home, most didn’t have the support of the father of their child. Not ONE of the girls ended up married to the guy. Most went on to be single moms. I also noticed that only one had a present positive father in her own life. Indeed a girl growing up without a present dad, is 7x more likely to become pregnant as a teen.

That experience was one of my prime 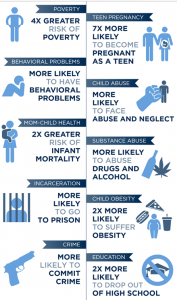 motivations to start speaking to teens about abstinence over 20 years ago. Since then, I’ve heard and read about the crisis of “fatherless” homes, and the effects on children.

Pew Research Center reports that only 11 percent of children in the U.S. lived apart from their fathers in 1960. Now, according to Census data, one in every three American children are growing up in a home without their biological father.  Some people have given up, and said we don’t need men, we just need more support for women who are parenting alone. But fathers, it appears from the numerous studies and data going back many decades, actually DO matter. This infographic from The National Fatherhood Initiative shows the many difficulties fatherless children face. If you are a parent raising your child without an involved father, this is not meant to heap more burdens on you. It’s only to encourage you to help your child see the difficulties that can arise from early sexual activity…such as the chance of single parenting and a tough road for them and their children.