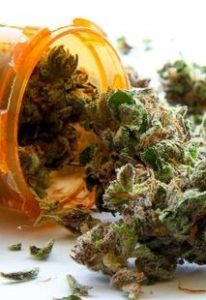 Illinois has not yet joined other states (most recently, Nevada) in making recreational marijuana legal. but recreational use was decriminalized in 2016 so that those caught with smaller amounts will only face a fine of $100 to $200. In April, senator Heather Steans (D-Chicago) and representative Kelly Cassidy (D-Chicago) introduced bills in the Illinois legislature to legalize recreational weed.  We already have 41 uses for which medical marijuana is legal in Illinois. According to chicagomag.com, “the limited implementation of medical marijuana, Steans thinks, has warmed people up to the possibility of legalizing recreational cannabis.”  I’m thinking it’s also warming our kids up to the idea that marijuana, if it has all these great medical benefits (41 approved uses in Illinois now), must be not only safe, but HEALTHY.

So what about medical marijuana?  There are two ingredients in marijuana that are relevant here:  THC (the one that give you the “high”) and CBD. There is some medical research that shows that marijuana is “probably” effective in treating a few medical conditions, such as spasticity experienced by those with multiple sclerosis (click HERE if you want to see the medical journal article).  But with more and more other conditions (such as PTSD and terminal illness) being added in various states, including Illinois, I can’t help but think that these other treatments just ‘work’ because it feels pretty good to get high compared to physical or emotional pain. Regarding a Florida group’s claim that “medical-grade marijuana alone, will not get that patient ‘high’….,” Politifact (a fact-check site) rated that claim “mostly false.” The person making the claim was basically saying that because the POINT was not to get high, they were not getting high but treating a condition.  THC is THE key in medical marijuana treatment in most cases.  The Politifact article interviewed David Casarett, author of Stoned: A Doctor’s Case for Medical Marijuana,” who said that low-THC strains or CBD-only oils don’t produce the same “buzz” as smoking a joint. But higher-THC (as is present in much of medical-grade marijuana), Casarett was quoted to say, “will most certainly get you high…. Just calling something ‘medical grade’ won’t prevent you from getting high. It’s like alcohol. Laboratory grade ethanol will get you just as drunk as home-brewed moonshine with the same alcohol content.”

I’ll write next about recreational marijuana, and the scientific data on the side-effects of marijuana use, especially among young people.