One of the funniest comments I ever got was from a student who said that at first she expected to see some old person with warts show up as the Teen Decision speaker.  Others were similarly relieved…”‘I like how you didn’t just say ‘Sex is bad. Don’t have sex.  Back in my day….’  You talked about how it actually is.”  While we immediately dispel students’ notions about boring 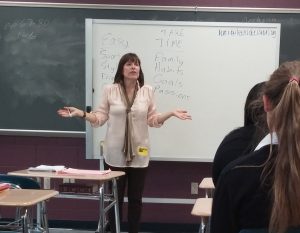 or irrelevant sex ed, it’s not so easy to dispel the misconceptions many ADULTS have about the abstinence message.  Today I watched a YouTube video of a 20-something sex educator who has multiple videos mocking abstinence education as “abstinence only,” “pledge cards,”  “purity rings,” and “lies, lies, lies.” The false stereotypes were rampant…and it made my blood boil. So, let’s tackle just one common misconception:  That abstinence education is “shame-based.”  One of the ways to connect with teens, whether as a parent, or a Teen Decision speaker, is for them to know you understand their world, their feelings and the pressures they face.  That includes the desire for a boyfriend or girlfriend and the urge to express their desires physically.  Shame is a poor motivator, and is never part of our classroom presentation, nor should it be how you approach your child. Instead, we’re matter-of-fact about discussing sex. And that makes it less awkward.  There was a study some years ago of teen-parent conversations about sex.  When parents didn’t show nervousness or discomfort (I know, that’s not easy!) but were straightforward and calm when discussing sex, teens were more likely to be OK with having those conversations, less nervous themselves, and more likely to feel parents (YOU) could be approached with questions and concerns. We want to send the message that there’s no shame in having feelings and desires, but managing those desires in a way that leads to good relationships and dating practices is key to a healthier, happier future.

Next time, I’ll tackle another misconception…that the message to wait to have sex is “fear-based.”