A single poor choice…often motivated by a desire to keep or gain a relationship, can lead to the dark, ugly world of “sextortion.”  An article on the site HealthDay, recounts the tragic case of a 12-year-old girl who’d lifted her shirt online at the request of someone she’d never met in person (and who turned out to be an adult man). She did not give in to the threat of the exposure of that picture, and the extortionist followed through, with the sexual picture spreading around her school. She was then hounded by that man and others for years, finally committing suicide at 16. The difference between that high-profile story and the reality for most, is that perpetrators usually know the victims.

The health site “HealthDay” defines sextortion as “threatening to share sexually explicit photos without consent if a person doesn’t agree to certain demands, such as sexual favors or money,” and reports that 5 percent of teens have been victims, and another 3 percent have been perpetrators.  That may seem like a small number, but that means that in every classroom of teens, across America, 2-3 people have been involved in sextortion. 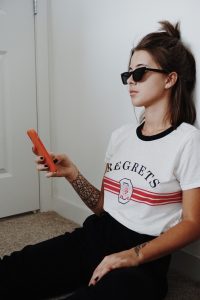 Certain groups are more at risk, according to the article: “Teens who identified as non-heterosexual were more than twice as likely to be the victim of sextortion…. Fifteen appears to be the most common age to be involved in sextortion, the new study found. One finding parents may find particularly alarming is that teens being victimized by sextortion attempts usually know the person trying to take advantage of them. They may have been a romantic partner or a friend. It’s unusual for someone to be targeted by a stranger, the researchers said.”

Talking to our teens about setting boundaries in relationships and in online interactions is critical to their safety, and specifically addressing sextortion might help our children stay safe when, in a single moment, they might be lured into a lapse of judgment that has years-long consequences. Even if it doesn’t happen to your teen, equipping teens to be wise and watchful can help them know how to help their friends stay safe as well.